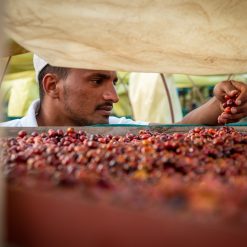 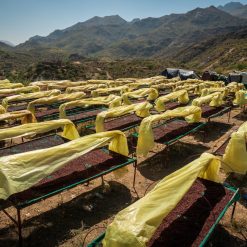 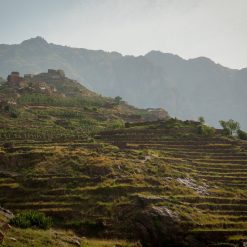 Yemen — bringing back the roots

We know this story below is a long read. But it’s worth it.
This incredible coffee has such a rich story that fits its rich, but delicate and clean flavours seamlessly. An incredible single farm DNA verified Yemenia variety coffee, in collaboration with our friends at Saints of Mokha.

Established in 2016, Saints of Mokha is a young, family run business based in Leicester, UK. Founders Omar and Mohammed excited about the intricate history of coffee, and passionate about sourcing and roasting the highest quality coffee available.
We met Omar numerous times at different coffee events and immediately hit it off. He’s the most friendly guy you’ll meet, so when we clicked it was already destined that we could do something together.
A couple of months ago we asked Omar about his connections with Qima Coffee, because, when we launch a coffee, we prefer it to be as exclusive as possible. Omar told us he had some great connections with Faris Sheibani, the founder and CEO of Qima Coffee.
For this exclusive collaboration Faris gave us an exclusive premium on a lot that had not yet been offered, so also had no chance of being in the Best of Yemen auction. However, we feel like this coffee would have scored very well if it would have been submitted.

Omar and his brother Mohammed, together with their head roaster Joe, personally brought the green coffee to our roastery in Rotterdam. Where we roasted this amazing coffee for the the first time, had good laughs, pizza, a tour through the city of Rotterdam and of course more than a couple cups of coffee.
A unique collaboration, built on trust, friendship and the true heritage of coffee.

In fact, over 98% of the world’s known cultivated varieties of Coffea arabica, can be traced back to Yemen. The arabica species, which was found wild in the forests of Ethiopia, travelled to Yemen at least 600 years ago, where it was grown as a cultivated crop, likely for the first time in the crop’s history. As it went from the lush forests of Ethiopia to the arid mountains of Yemen, the genetics of the Yemeni trees would change over time to adapt to the new environment through domestication and natural selection. Coffee cultivation continued in Yemen for the next 300 years, during which the genetics of the Yemeni coffee trees gradually changed through domestication and a process known as genetic drift, such that they became distinctly different from their Ethiopian ancestors. These unique trees would go on to become the ‘mother’ trees of almost all of the cultivated varieties known today.

Within the species of arabica, there exist dozens of varieties which fall under several groups termed mother populations.

On August 14th 2020, Qima Coffee announced the discovery of an entirely new mother population that was previously unknown to the coffee world.

Yemenia is a new mother population within the species of Coffea arabica that is found exclusively in Yemen, and represents an ocean of unexplored genetics and future varieties that have the potential to reshape the world of arabica for centuries to come.

To assess the cup quality of Yemen, Qima Coffee, in collaboration with the Alliance for Coffee Excellence, put together an independent jury panel of 35 cuppers from 24 leading global coffee companies across 14 countries. The cup quality was found to be exceptional and the coffees were ranked as amongst the highest in the world.

Haraaz is famous for its villages which cling to nearly inaccessible rocky peaks. Despite the elevation of the mountains reaching over 2000 above sea level, the weather stays warm and comfortable. The farms seem to hang in the sky when the fog touches them. Haraaz is Yemen’s largest coffee producing area by volume. The area harbours strong anti-qat sentiments here as locals perceive it as a social vice.

Shurafah is a village in Haraaz, a mountainous, ancient region in the governorate of Sana’a, and home to 30 farming families. The area has lush valleys and highlands where many different types of crops are grown. However, coffee remains the most important. The stratospheric altitudes, where the coffee is grown, adds to the unique flavour profile of Haraazi coffee and the farmers believe that the coffee is so distinctive because of the region’s fertile soil. Over 90% of all the crops grown in Haraaz are coffee, making it Yemen’s largest coffee growing region.

A unique collaboration between A.M.O.C. and Saints of Mokha.
New varieties are the next best thing, believe us. And the most beautiful part of this specific coffee is that, in a way, it shows the future, which goes back to the roots of coffee.
Only available in 300 gram AMOC jars or vacuum refill.

We love packaging design, but we hate waste and single-use packaging.
Therefore we try to find a well thought-out balance between aesthetics and sustainability. The hardest part here is having a food-grade solution that fits not just local waste processing, but also national and international.

The over-exploited words ‘reuse, reduce, recycle’ are more than a hollow message like having a green leaf on the label, and we try to live by them as much as possible. For this reason you can pick 1 of 3 types of packaging when you order coffee with us:
– AMOC Jar: our AMOC jars are made from fully recyclable PET. They’re light-weight, which means not many resources are necessary for production. And most important: they are reusable for (almost) an eternity.

– Refill: if you agree with us that opening a new bag and throwing it out as soon as you’ve finished the coffee is bullsh*it: it’s very hard to find a solution for this. Due to rules and regulations your standard coffee pouch can’t be used twice, which is why we can’t refill them. Compostable and recyclable certifications are often vague, only apply under certain conditions or nothing more than a sham.
This is why we decided to offer a different kind of bag for our refills, without the valve or zipper, but simply a thin layer of food grade PP material vacuum packed. These weight about 40% less than conventional coffee bags (meaning less resources are needed to make them), are easy to recycle in most recycling plants and take the minimum amount of volume to ship.

– Kilo: after a long journey trying to find the best packaging for our bigger bags we came to the conclusion that it’s very hard to find a decent, sustainable packaging that also protects the contents well. We’d hate to see the quality of the contents go to waste, because so much energy, water and other resources are put into making the coffee taste as good as possible. Therefore we ended up picking our Kilo bags on recyclability and barrier properties. This bag is (under certain circumstances) recyclable and has amazing barrier properties to keep those beans fresh and tasty for as long as possible.

We use cookies on our website to give you the most relevant experience by remembering your preferences and repeat visits. By clicking “Accept All”, you consent to the use of ALL the cookies. However, you may visit "Cookie Settings" to provide a controlled consent.
Cookie SettingsAccept All
Manage consent

This website uses cookies to improve your experience while you navigate through the website. Out of these, the cookies that are categorized as necessary are stored on your browser as they are essential for the working of basic functionalities of the website. We also use third-party cookies that help us analyze and understand how you use this website. These cookies will be stored in your browser only with your consent. You also have the option to opt-out of these cookies. But opting out of some of these cookies may affect your browsing experience.
Necessary Always Enabled
Necessary cookies are absolutely essential for the website to function properly. These cookies ensure basic functionalities and security features of the website, anonymously.
Functional
Functional cookies help to perform certain functionalities like sharing the content of the website on social media platforms, collect feedbacks, and other third-party features.
Performance
Performance cookies are used to understand and analyze the key performance indexes of the website which helps in delivering a better user experience for the visitors.
Analytics
Analytical cookies are used to understand how visitors interact with the website. These cookies help provide information on metrics the number of visitors, bounce rate, traffic source, etc.
Advertisement
Advertisement cookies are used to provide visitors with relevant ads and marketing campaigns. These cookies track visitors across websites and collect information to provide customized ads.
Others
Other uncategorized cookies are those that are being analyzed and have not been classified into a category as yet.
SAVE & ACCEPT
Powered by